What is a Pinard? – The World’s Oldest Tool For Hearing Fetal Heartbeats 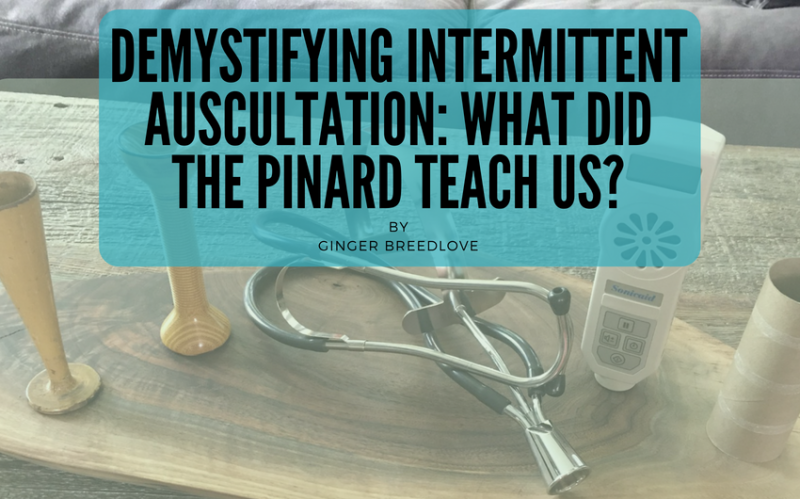 In 1895, Adolphe Pinard (1844–1934) a French obstetrician, designed an elegant, trumpet-shaped instrument for listening to babies in utero. This trumpet was made of wood and featured a single diameter opening drilled through the center. Using this simple tool, sound made by the fetal heart was efficiently transmitted to the listener’s ear.

Aptly named after its creator, the Pinard is still regularly used by midwives in Europe. It is also the primary instrument to auscultate fetal heart tones in most developing countries.

So what does this instrument with a funny name look like? Above is an image showing the evolutionary changes of this device.

First, from left to right of the image, is a Pinard more than 100 years old gifted to Ginger Breedlove by a Chinese Obstetrician as a thank you for providing education and training on emergency obstetrics and newborn resuscitation to their medical staff. These often allow auscultation of heart tones by 18-20 weeks. The flat end is placed on the ear of the listener while the wider horn is placed on the pregnant abdomen near the baby’s back.

Next, a replica Pinard from exotic wood, hand turned by Ginger’s husband, and partner in Grow Midwives LLC, Joe Booth.

Then a metal, unicorn-like instrument used for many years that was referred to as a fetoscope. This tool combines the appearance and functionality from both the Pinard and stethoscope.

Until the late 1970’s, the fetoscope was used to auscultate heart sounds in pregnancy as well as women in labor. Similarly, a regular stethoscope can be used to find and listen to heart sounds. The average time to hear a heartbeat begins around 18 weeks for a skilled listener, maybe later if the user is untrained.

And finally, the Doppler. A hand-held electronic device that amplifies fetal heart sounds as early as 8 weeks of pregnancy.

Wait, but what about the toilet paper roll? YES, this works too! The pregnancy must be well past 28 weeks with a room very quiet. With patience and the ability to find the baby’s back, it will help amplify sound just like the Pinard!

And lastly, one can hear the baby’s heartbeat by simply placing your ear on the pregnant belly, and quietly waiting.

Fast forward to the technology world. There are at least seven apps one can purchase from a variety of vendors, using unique methods and equipment, that will amplify sound and even trace the fetal heart rate on a phone or other device.

My favorite Midwife educational handout on how to use the incredible, low cost, and reliable Pinard is from Sara Wickham, a Midwife from the UK. Below are her five steps to using a Pinard.

With all of these positive attributes, it’s surprising that using a Pinard has become a lost art for those providing healthcare to women in the United States. Instead, most healthcare providers favor Electronic Fetal Monitoring devices and Dopplers.

Most US hospitals still maintain an institutional policy, meant to reduce liability should something unexpected happen to the newborn, that forces women to have continuous electronic fetal monitoring beginning in active labor. These policies persist in spite of unimproved outcomes for newborns since routine use became mainstream in the 1970’s.

A fascinating history of when the Pinard lost popularity in favor of electronic devices in the US can be found on this website that charts the “History of Fetal Monitoring”.

Although the conclusions of the article leave out evidence-based practice recommendations for the Pinard’s value in intermittent auscultation (IA) for healthy laboring women, clear positive conclusions can be made regarding the Pinard’s use.

Cochrane, the well-respected primary database on randomized clinical trials, suggests about use of the Pinard, “As intermittent Electronic fetal monitoring (EFM) and Doppler were associated with higher rates of caesarean sections compared with routine Pinard monitoring, women, health practitioners and policy makers need to consider these results in the absence of evidence of short- and long-term benefits for the mother or baby.”

Two challenges have been raised regarding use of the Pinard include the inability to auscultate the heart sounds in utero at a prenatal visit until 18-20 weeks’ gestation compared to 8-10 weeks with an EFM or Doppler.

And secondly, consistent, uniform use of intermittent monitoring in laboring women (with a Pinard or Doppler) requires training. The most robust training and resources for midwives to learn about IA, including policies for hospitals, implementing with risk screening, and a video for training purposes can be found online.

Today, the Pinard is not commonly seen or used in the United States. Which is a shame, because Pinards are fashionable, evidence-based tools that can provide value to mothers and babies. The rest of the world, both the developed and the developing, knows about the usefulness of the Pinard and we hope you incorporate at least one into your Midwife’s toolkit.

Grow Midwives next webinar on Thursday June, 21st at 7 p.m. cst. will explore how to implement Evidence-Based Practice recommendations of IA into midwifery practice as one way to maintain physiologic labor and birth, improve outcomes, and increase patient satisfaction.

Resources on successful integration in hospital setting and out-of-hospital setting will be reviewed. Emphasis will include adequacy of skills training, competency, and consistency in IA use by all healthcare providers.

RSVP for the Webinar Here!